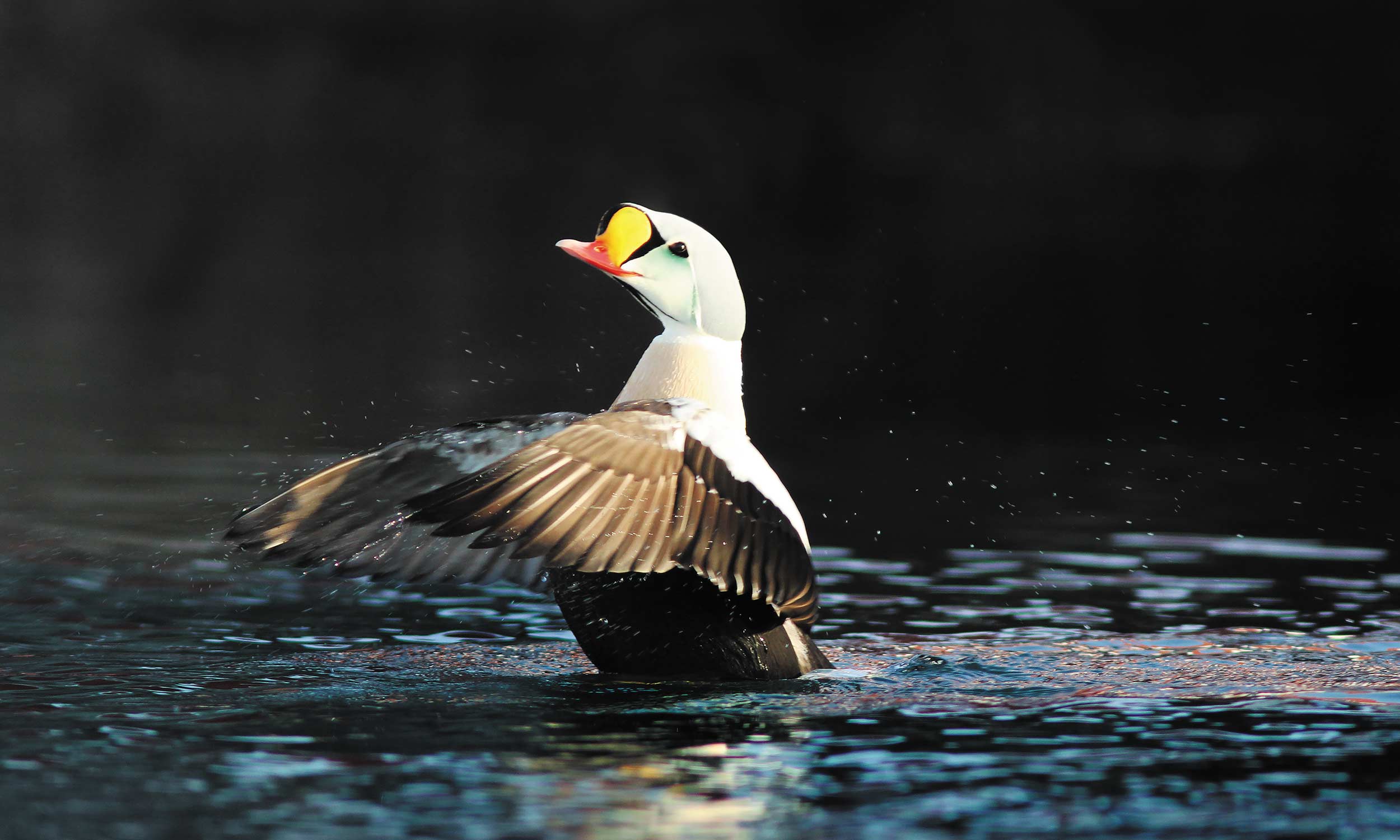 Birdwatching Norway offers guided birding tours in Norway and Scandinavia. Both fixed tours and custom tours.  A custom tour can be adapted to suit your preferences. Whether you are eager twitchers, bird photographers or more relaxed birders.

“Enjoy the beautiful artic birds on closer range. From the intense bird cliffs to the peaceful taiga”

Ten thousands of King Eiders and Common Eiders are wintering along the arctic coast of Varanger. The critically endangered Steller`s Eider has become very hard to find in Europe. In Varanger it it still a common bird at this time of the year. They often enter the fishing harbours, where they come close to land. From photo hides you can get close up to all the three species of Eider, as well as the Long-tailed Duck.

Seabird migration in Varanger May

During May the masses of migratory birds arrive. Some species are passing by, while others return to their breeding grounds. A massive Seabird migration can be seen from the outermost points,- along the coast. Fulmars are the most numerous and can come in a constant stream, as far as the eye can see.

Pomarine Skua and White-billed Diver are character birds at this time. Long-tailed Skua, Arctic Skua, Red-throated,- and Black-throated Diver are other species that can be observed in impressive numbers. Other highlights are the big flocks of Common Scoters and Long-tailed Duck. King Eiders are still present in good numbers, while the Steller`s Eider are seen in smaller flocks.

The Varanger peninsula and the Pasvik valley.

The midnight sun rips the artic landscape in a colourful light. The lovely atmosphere is accompanied by the singing Bluethroats, Lapland Buntings, Red-throated Pipit, and Shore Larks.

During June the last migratory birds returns.  The latest is the Arctic Warbler and the Little Bunting wish both breeds in the Pasvik valley. They winter in South-East Asia and has their Western most distribution in Northern Scandinavia. This is also home for several other Siberian species, such as Northern Hawk Owl, Siberian Jay, Siberian Tit, Waxwing, Pine Grosbeak, Smew, Whooper Swan and Taiga Bean Goose. Some of the other species you are likely to find here is Short-eared Owl, Little Gull, Capercaillie, Black,-and Willow Grouse.

Birding in Southern Norway All year

Due to a mild climate and a diverse Nature, this region has the largest bio-diversity in Norway. Several species has their distribution limit here and the distance is short between the good birding areas. The coastline includes beaches, wetlands and rocky shores. Inside the coast lie cultural landscape, mixed forests and lakes. Further inland you will find large forests and mountains.

Mølen is the best migration point in Norway. On good days, the numbers of migrating passerines can reach hundred thousand. The most numerous species are Brambling, Chaffinch, European Siskin and Wood Pigeon. Pink-footed Goose, European Siskin, Mealy Redpoll, Tree Pipit, Meadow Pipit are some of the many other species that occurs in high numbers. The surrounding Sea is important feeding area for Sea Ducks, Grebes and Divers. Especially for the Velvet Scoter, wish is common to see here the whole year. This is also a great “rarity trap” where some of the most remarkable records in Europe has been done. At the Mølen Ornithological Station you can have a look at the ringing activity and see some birds close up.

The peninsula is build up by the end moraine from the last ice age, 11000 years ago. Many brutal Viking battles has taken place here and several huge burial mounds are build up, by the pebbles. This is one of many historic sites in this part of Norway.

During a good morning flight, hundreds of thousands of birds gets concentrated over Falsterbo. They are lead towards the last strip of land, as they avoid crossing the open sea, as long as possible. The peninsula acts as a funnel and the migrating birds mostly pas on close range. The diversity is vast and includes several species of Passerines, Raptors, Waterfowls, Shorebirds and Seabirds.

The autumn migration starts already in the middle of July, with the adult shorebirds. During August and early September the other long-distance migrants leaves Northern Europe. Some of the most numerous is Honey Buzzard wish can appear in four figured numbers during one day, Eurasian Hobby, Osprey, Marsh Harrier, Greylag Goose, Common Swift, House Martin, Sand Martin, Barn Swallow, Tree Pipit, Yellow Wagtail and several species of Shorebirds. The small woods, scrubland and gardens attracts many nocturnal migrants like Redstarts, Flycatchers and several species of Warblers.

The migration is at the most intense from late September to the middle of October. Barnacle Goose, Brambling, Chaffinch, Wood Pigeon, Blue Tit and Starling are the most numerous species. Siskin, Linnet, Meadow Pipit, Common Eider and Eurasian Wigeon are just some of the many other species that migrates in large numbers. The raptor migration is perhaps the most famous attraction. Here you can see most of the North European species during a single day. Common Buzzard and Eurasian Sparrowhawk are the most numerous. In September and October, the daily numbers can reach several thousands.  Other common raptors at this time are Red Kite, Hen Harrier, Merlin and European Kestrel. The Pallid Harrier, Black Kite, Peregrine Falcon, White-tailed Eagle and Golden Eagle are more scares, but occurs frequently.

This nature phenomenon is something every birder should experience!

“The sky seems to be filled with drifting golden leafs, as the Sun hits the constant flow of Finches, Pipits and Buntings.  A wall of soft sound builds up by the calls from the migrating masses.  Creating the most peaceful and harmonic, jet intense atmosphere” Surrounded by birds you feel like you are in the center of the migration, exactly where you want to be. This in no place chill to much thou, and maximum attention is required. A minor change in tone, shape or flight pattern reveals a Ortolan Bunting, a Tawvy Pipit or a Citrine Wagtail, disappearing as quickly as it come.